Our shop is located right at one of the old gates to the city (the "Portal del Coixo"), next to the wall, in the heart of the Velluters district.

The neighbourhood began as a simple grouping of rural houses within the Christian wall, but at the end of the 14th and beginning of the 15th century it had an extraordinary development because it was here that all the city's fabulous silk industry and related guilds were set up. They were always "workshop houses" where the families lived and there were also the silk looms where all the members of the family had a role to play. It is estimated that there were about 5,000 looms in the neighborhood at full capacity. 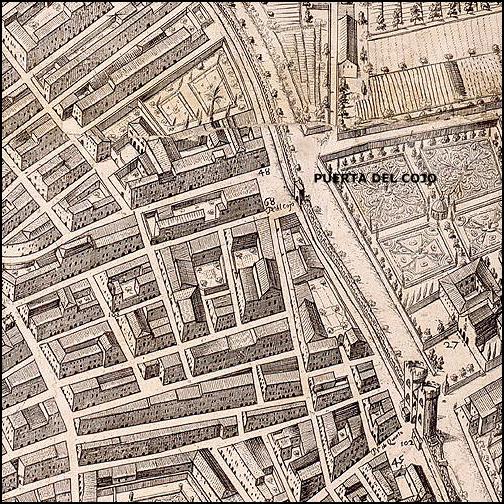 Our shop is approximately next to number 48 which appears next to the Puerta del Cojo which was where we now see the bus stop 5 INTERIOR. Down on the right the Quart Towers.

When the silk industry collapsed, definitely in the mid-nineteenth century, the house-workshops were demolished and gave way to new buildings, which are what we see today, most of them built between 1850 and 1900 at most. It is true, fortunately, that there are still some remarkable buildings such as the Silk Art College, the Old Hospital, the Tamarit Palace, the Royal College of the Pious Schools, the Gardens of Parcent, the Church of Pilar, the House of the Marquises of Llanera, the Fusters Guild (25 metres from our shop) or the Convent of La Encarnación (right at the door of our shop). At one end are the Quart Towers, one of the symbols of the neighbourhood and Valencia.

In Camarón Street, almost in Guillem de Castro, there are still some houses from the period of maximum splendour of silk, although they are not in the best state of conservation. 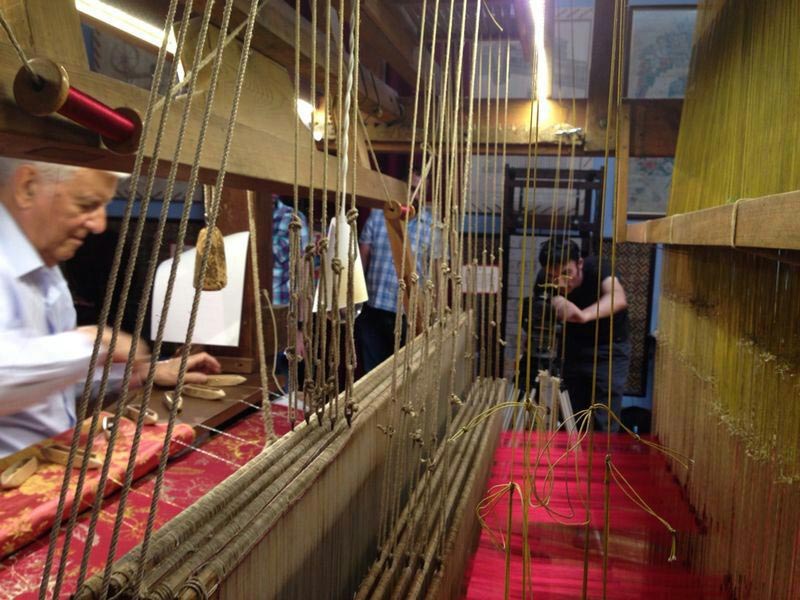 In order to alleviate the famine caused by the collapse of the silk industry, it was decided in 1865 to demolish the Wall of Valencia and thus give work to many of the unemployed. This led to the disappearance of the physical barrier between the Velluters district and what was outside the walls, which developed in an extraordinary way at the same time as the new buildings of Velluters, so that they almost form a unity, at least in terms of architecture.

One of the centres of the neighbourhood is the MERCADO DE ROJAS CLEMENTE, a charming neighbourhood market with stalls of great quality and tradition. We really like JUANJO's vegetables and fruits, Manuela's Greek food at her stand SABORES GRIEGOS, the fabulous anchovies, cod and roasted vegetables of JOSE Y MANOLI or the new wine cellar ULTRAVINS where you can taste some local wines. The  BAR ROJAS CLEMENTE from outside is, by itself, a reason to visit for brunch or lunch.

A few meters from the market is the restaurant ESPINOSA, where you can have brunch, lunch or dinner.

If you want to have an aperitif or a snack you can go to SORBITO DIVINO with its cellar under the glass, to LA CAVA DE MARTE just in front of the Torres de Quart, to ANITA GIRO or to the HUERTA DE RAMONET with its little terrace in front of our shop.

If you feel like eating you have many options like LIGAZON and its magnificent terrace, CANELA next to the Towers of Quart. the same HUERTA DE RAMONET or EL SALATEN. For creative kitchens you can go to RESTAURANT 64 or PELEGRÍ.

If you prefer to enjoy kitchens from other places you can try NIKKEI of Japanese Peruvian fusion or  LA FORCOLA, the Italian restaurant where the Italians eat.

There is fantastic coffee at the MAYAN COFFEE or the BEAT BREW BAR. And a very pleasant area is the Viriato square full of design or music students, with the VIRIATO or MARIA MANDILES cafés.

The night takes on a different colour in the neighbourhood and you can go to RADIOCITY and its many atmospheres or, across the Gran Vía, to  LOCO CLUB, with very frequent live performances.

Our neighborhood is full of artists. On the one hand the EASD School of Design, the Conservatory of Music and Dance, on the other hand the various street art artists such as the XLF collective that have populated Valencia with works photographed by thousands and thousands of travellers. It is even a neighborhood full of tattoo workshops, for some even a pilgrimage center.